When Adelaide producer and performer Joanne Hartstone says this year will be “somewhat of a different Fringe for us”, it’s something of an understatement.

In 2022, however, the company isn’t returning to the garden: instead, it will present an all-digital program of eight watch-from-home shows spanning theatre, cabaret, dance and physical theatre.

Hartstone tells InReview that she and HKP production manager Tom Kitney made their decision late last year based on both logistics and artistic considerations, against the backdrop of uncertainty about how COVID-19 would continue to impact live performance.

“We thought that if we wanted to do Fringe next year [in 2022], which we did – this year is my 17th Adelaide Fringe – how can we actually best participate?” says Hartstone, who acted in her first Fringe production in 2007, a decade before she and Kitney formed their own production house.

“Really pushing our decision was the discussion Tom and I had about where our priorities should be in this next couple of years with digital, because we thought COVID wasn’t going to be going away… but we do actually have a solution to that which still keeps crew employed, and gives artists the opportunity to present new work and share that work with wider audiences.”

HKP’s Black Box Live season of on-demand and livestreamed shows in this year’s Adelaide Fringe builds on skills and expertise that Hartstone and Kitney have honed over the past year or so as they pivoted towards digital theatre in the face of pandemic obstacles.

Hartstone ­says their 2021 Fringe was “pretty challenging”, with South Australian live performance venues at that time operating at only 50 per cent capacity. HKP’s festival season ran at a small loss, although the venue and some of its shows were able to access financial support through the Adelaide Fringe Artist Fund and the Federal Government’s RISE Fund.

On the upside, it still managed to sell around 5500 tickets across all its shows, which won a string of Fringe awards. HKP also launched Black Box Live, which saw some of the live performances streamed online during the 2021 Adelaide Fringe.

“Our grand idea was to livestream and see what that would look like and how theatre is developed through those streaming technologies,” Hartstone says of the 2021 Fringe season.

“That, for us, was a game-changer… and that’s really where our focus has been during this pandemic: learning how to make digital theatre, and make it really good, so that people feel it’s a great alternative to seeing live shows in person.”

In August last year, HKP took its new venture further afield, presenting several shows on-demand at the Edinburgh Fringe and livestreaming shows at the Hollywood Fringe in California. It didn’t have high expectations, especially given the tough competition among artists vying for audiences in the jam-packed Edinburgh program.

“We were really surprised – we thought it might only be 10 people a show but it was actually in the hundreds,” Hartstone says of audience numbers.

“It wasn’t just about tickets sales, though. We were definitely being mentioned as part of the zeitgeist at both festivals.” 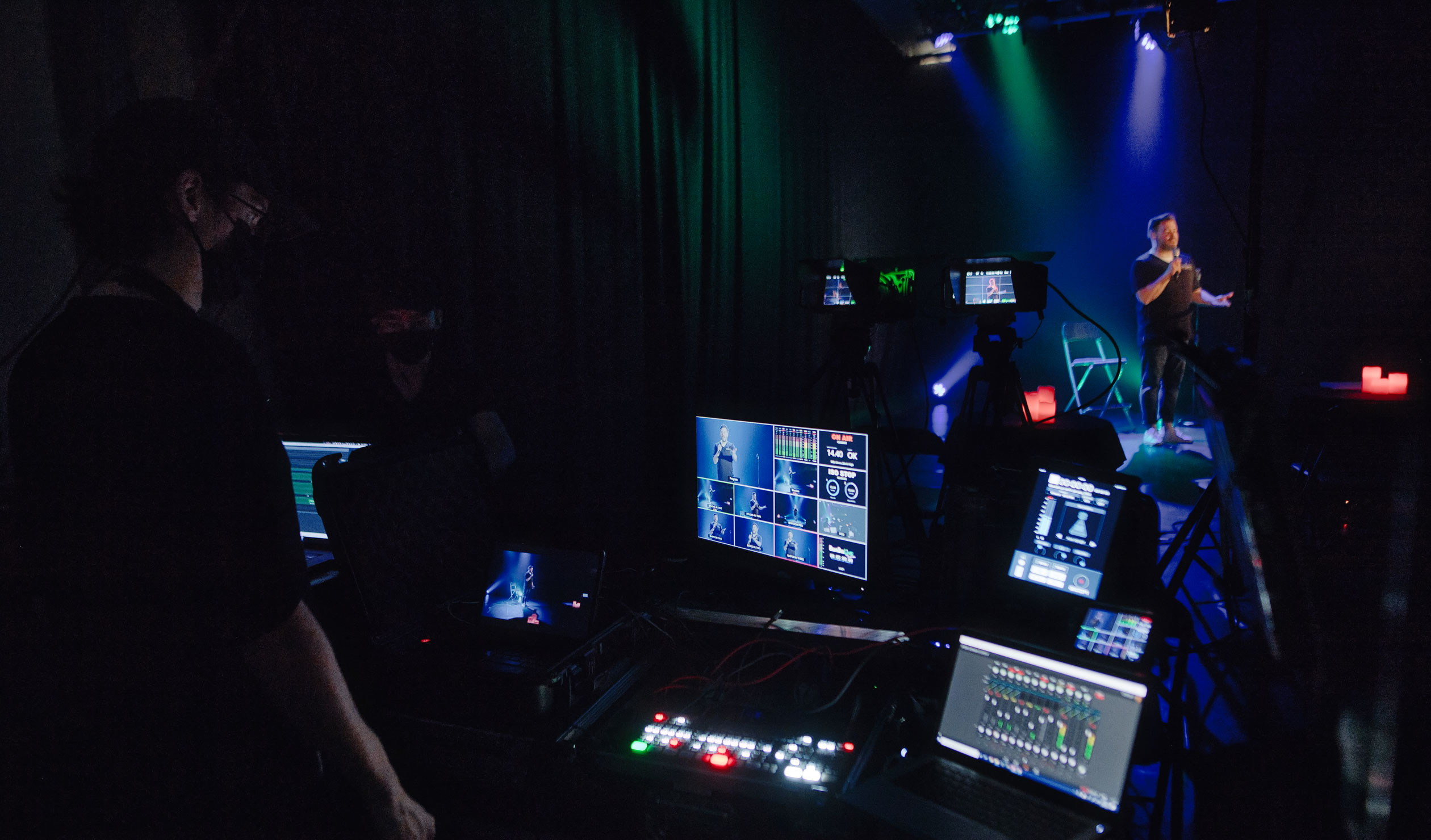 Each Black Box Live show is recorded with a small live audience and crew of at least five, with multiple cameras used to help ensure “a dynamic viewing experience”.

For the Hollywood and Edinburgh festivals, the shows were filmed in Adelaide’s Bakehouse Theatre. For the 2022 Adelaide Fringe, HKP has just finished recording several shows at The Rehearsal Shed in Goodwood ­– including a trilogy of monologues by local performer Tracy Crisp (to be presented in a single on-demand show titled You Can’t Hide in the Desert) and a new show by Adelaide GP and musician Dr Lane Hinchcliffe (Prepping for Theatre).

Black Box Live is also presenting a return on-demand season at Fringe of The Girl Who Jumped Off the Hollywood Sign, The Reichstag is Burning (written and performed by Hartstone), 2021 Fringe Best Theatre award winner Something in the Water, Erin Fowler’s EGG (which will also be remounted for a live season at The Mill), and two dance works by SA choreographer Lewis Major.

In addition, it is working with Major to livestream his double bill Satori and Unfolding from the Hopgood Theatre at Noarlunga.

Hartstone acknowledges there are additional risks associated with livestreaming performance. With one of its Hollywood Fringe shows, for example, the internet crashed mid-performance, resulting in a brief pause in the stream.

“But we do plan for those technical redundancies. That’s part of the learning… actually, that’s also part of the excitement, because it’s live. It’s like when you watch ice-skating – anything can happen at any stage; it’s just on that edge of danger.” 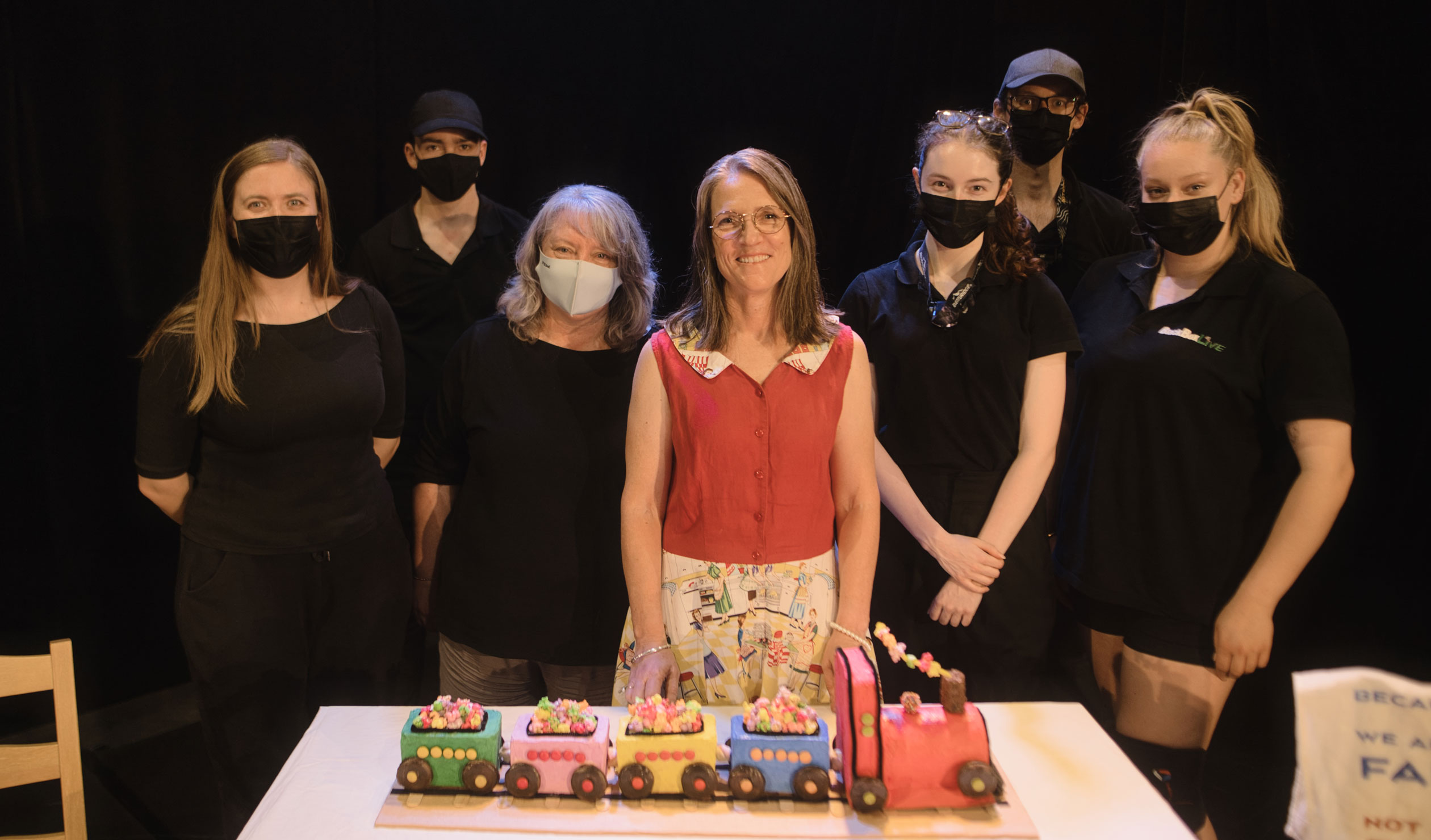 Hartstone emphasises that HKP doesn’t want to discourage Fringe-goers from going to see live shows ­– of which there are hundreds in this year’s program ­– but says one of the advantages of digital theatre is that it increases the accessibility of the arts and offers an alternative for audiences.

It’s also a way of ensuring the viability of a local production company during what remains a tough time for all those in the arts and entertainment sector.

“There’s absolutely no way that we are not going to be doing live performances with live audiences in future… [but] it’s fair to say that no matter what happens going forward, we will always incorporate digital,” Hartstone says.

“We’re saying to audiences, ‘this is what we’ve got for this year and we’d love you to watch it and give us feedback on it because it’s still an evolving art form for us’.”

Details of Hartstone-Kitney Productions’ 2022 Adelaide Fringe Black Box Live season can be found here. Fringe will run from February 18 to March 20, with the full program online.