Paul Greenaway’s GAGPROJECTS, which represents both Hossein and his artist wife Angela, released a statement this week saying he died after suffering a massive heart attack.

Hossein was born in Iran in 1949 and graduated from the School of Fine Art in Tehran in 1970 before emigrating to Australia in 1973 and completing further studies at the South Australian School of Art, where he met Port Pirie-born Angela.

GAGPROJECTS (previously known as Greenaway Art Gallery) says that over the past 49 years Hossein has established himself as one of Australia’s leading contemporary artists, “with a stellar career that took him all over the world”.

“Inspired by the writings of the Persian poet Rumi and his passion for a pared-back, haiku-like approach to material and form, Hossein is remembered for his artworks that are both powerful and poetic.”

Hossein’s practice encompassed a range of media, including installation, sculpture and video, with his work often exploring “notions of an essential connection to place, the nature of being, and the ephemerality of existence”.

Hossein has often made artwork in collaboration with Angela and their son Nassiem. The couple have a studio at the centre of their Adelaide home, and have worked together on commissions including the public artworks 14 Pieces (2005), outside the South Australian Museum; Ginkgo Gates (2011), at the western entrance of the Adelaide Botanic Garden, and Irish Famine Memorial (1999), a bronze sculpture at the Hyde Park Barracks in Sydney. 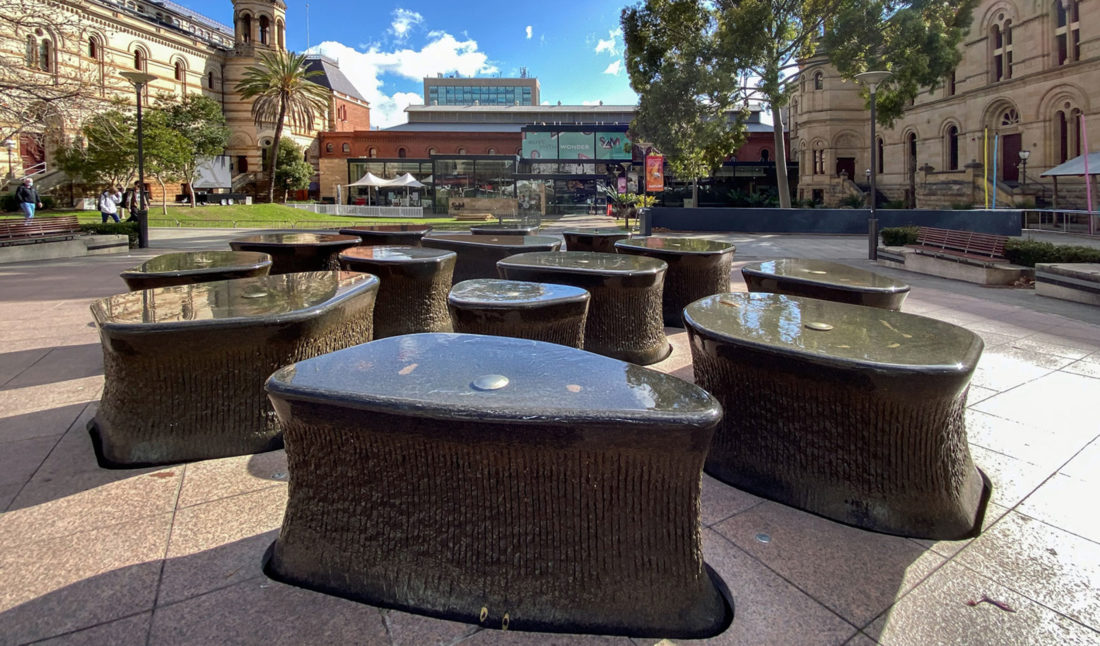 Art Gallery of South Australia director Rhana Devenport told InReview that the gallery had the honour of being home to many works by Hossein, whom she described as an internationally important artist.

“Hossein’s passing leaves us all deeply shocked and saddened at AGSA – it has been a great privilege to work with him and to witness the extraordinary impact he has had nationally and internationally,” Devenport said, adding that his turning tree called Remembering Rain is one of the most popular works in the gallery.

“Despite Hossein’s tragic passing, his legacy will continue to inspire, astonish and resonate with our visitors every day here at AGSA.”

Both Hossein and Angela Valamanesh are among 25 leading Australian contemporary artists selected to exhibit in the 2022 Adelaide Biennial of Australian Art: Free/State, curated by Sebastian Goldspink and set to be presented at the Art Gallery of South Australia from March 4. They have been collaborating on new works exploring the concept of home.

In announcing the Free/State artist line-up late last year, Goldspink referred to the couple and fellow artists Tracey Moffatt and Julie Rrap as trailblazers: “When these artists were emerging, they were outsiders in a very different type of art world. They were prescient and ahead of their time.”

In its statement, GAGPROJECTS notes that eshgh is the Farsi word for “love”, adding: “Hossein instilled this pure concept into all his art, and indeed, into every aspect of his life.”

It also includes the following excerpt from a 2005 artist statement: “Most works of art have within them the seed of an idea and the opportunity of exhibiting them may make it possible for these seeds to grow in the viewer’s mind with different interpretations. My original idea is only the beginning and I also follow the development of the work with interest. It is by our looking at the works that they realise their potential.”