Just under half of the 40,000 vines on Charles Rosback’s 15ha Bowyer Ridge Vineyard were damaged during the December 20 fire that burnt through 25,000 hectares of land and destroyed more than 70 homes and 200 vehicles across the Adelaide Hills in 2019.

A third of the region’s 3000ha of vineyards were within the fire scar with about 500ha of vines across 60 vineyards sustaining damage.

The flames came within metres of Rosback’s home nestled in the vineyard where he grows some of the cool climate region’s most prized chardonnay grapes for several high profile local wineries. 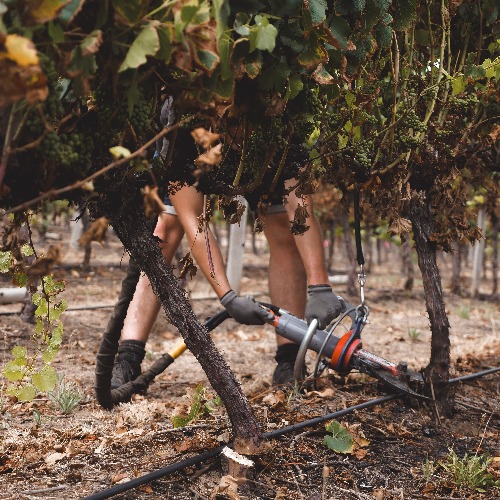 The MaxiCut system at work in the vineyard.

Despite some initial advice to leave the burnt vines to recover as best they could until winter, by mid-January Rosback had assembled a team of volunteers to begin restoring the vineyard.

About 15 kilometres of irrigation tube and 1450 posts were replaced on the property and a further 45km of irrigation repaired to reinstate water to thirsty vines.

GPS technology was used to assess the worst affected vines and in what was considered a drastic move by some, the team cut off about 25 per cent of the vines at ground level and heavily pruned a further 20 per cent.

“As a business owner and grape grower, I’m very proactive in how I approach things and it didn’t take us very long to come up with a plan to act quickly and in a very complete manner, hence, we went through and cut the vines back,” Rosback said.

The quick action allowed new shoots to be trained into replacement trunks before the end of the growing season last year.

A little over 18 months later and 85 per cent of the fully cut vines have recovered fully.

The vineyard produced a good crop of chardonnay grapes this vintage and is expected to return to full production for the 2022 vintage.

“I planted that vineyard myself in 2002 and to have that burnt and have to go through and cut those vines down to ground level — emotionally that was very hard for me,” Rosback said.

“Probably one of the most difficult things from the impact of the fire is that it wasn’t whole blocks that burnt, but it was a few vines here and there across the whole vineyard so you then need to treat those vines individually.

“The vintage 2020 was a complete loss due to smoke taint and direct fire impact so there was a big financial loss in 2020.

“Fortunately, 2021 was quite a good year — prices were up and yields were up so the financial result was quite good despite being about 25 per cent down on our total crop.” The vines were cut back using GLOG Viticulture’s MaxiCut system, usually used in winter to cut away trunks suffering Eutypa dieback, to cut trunks off just a few centimetres from the ground.

The adapted MaxiCut system, which is essentially a dual set of high-powered vineshears run off a tractor’s hydraulic system, can work through about 500 metres of vines in an hour.

The system was also used to cut back fire-affected vines at other vineyards in the Adelaide Hills after the bushfire.

GLOG Viticulture business development manager Martha Valkenburg said while she was unsure by how much the mid-summer pruning technique shortened the recovery time, it saved a huge amount of time in manual labour. “We definitely had a significant cost and time saving, and using the MaxiCut made it possible to get the work done in the time frame required,” she said.

“I have been doing studies on a vineyard we have recently taken management of that didn’t use MaxiCut after the fires and it took them about six to eight months to get the work done that we did in a month.

“For the vines that were partially cut with the MaxiCut, we were back to full production in 12 months which would not have been possible without the technology.”