The University of South Australia (UniSA) technology uses algorithms and artificial intelligence to measures heart rate, breathing rate, temperature, movement and blood oxygen saturation. It was developed to be used on drones and licensed to Canadian tech company Draganfly in March last year.

However, a trial of the drones in Westport, Connecticut, in April was dumped before it got off the ground following criticisms about the potential invasion of privacy.

Instead, Draganfly has adapted the technology into monitoring kiosks, which have been rolled out at universities and workplaces across the US.

Lead UniSA researcher Professor Javaan Chahl said the ‘pandemic drone’ idea was developed in the early stages of the coronavirus pandemic before it was known how lethal the virus was.

“In March, we really didn’t know what we were dealing with or if it might evolve into something else,” he said.

“There was a privacy concern but it was the nature of the pandemic that changed the project as well.”

The adapted monitoring stations, which include a thermal camera for temperature readings, were first rolled out at Alabama State University in August.

The university now has five ‘kiosks’ on campus as well as five social distancing monitoring points.

Units have since been rolled out at other American universities as well as workplaces. 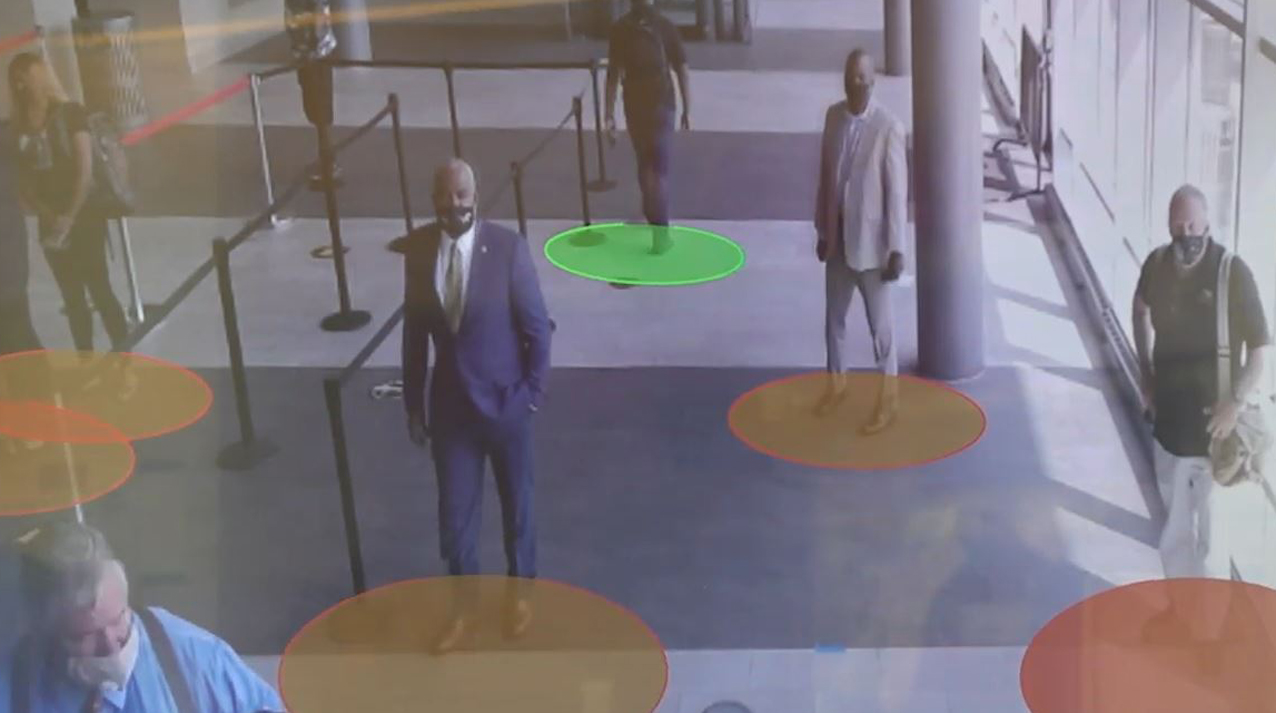 UniSA Technology to help detect COVID-19 and monitor social distancing has been rolled out in the US.

“We hesitate to say it can diagnose COVID-19 but it certainly tells you who to look at again,” Chahl said.

“What we do is if their heart rate is elevated or their breathing rate is up or their blood oxygen saturation is depressed then we refer them to secondary screening for those marginal cases.

“It basically increases the flow through commercial venues, schools and universities.

“The machine is more accurate than a forehead thermometer – it’s more expensive – but it’s faster and you don’t necessarily need to have a person there or you can have one person monitoring multiple machines.”

Chahl said the machines had also been rolled out into industrial workplaces in a bid by companies to keep COVID-19 out of their workplaces.

“It was our hope that it would contribute to solving some problems over there,” he said.

“There are all sorts of strategic concerns with the American economy being in the state it’s in and they (Draganfly) seem to be continuously making sales in a steady stream.

“In the case of schools, they definitely need to get the schools open in the US because if the kids can’t go to school then the parents can’t go to work and it’s very important that America gets back to work.”

“Although other people have come up with similar things since, we think the Australian one was the first,” Chahl said.

“People can see it and what we found was that the number of social distancing violations reduced by about 50 per cent.”

The UniSA research began in 2017 and previously looked at using the technology to monitor and react to elderly falls, look for signs of life in war zones or following a natural disaster and monitoring the heart rates of babies in neonatal incubators.

Chahl said while the collaboration with Draganfly was ongoing, his team of researchers had now begun to move into new areas such as measuring the vital signs of animals for agricultural, ecological and zoological applications.

“Having had a taste of what can be done, you can come up with exotic applications that nobody has thought of before or you can realise the potential to take these measurements and make them useful for people,” he said.

UniSA last week released a video documenting the development of the Draganfly technology and its initial rollout in Alabama.