The sale of about 75 per cent of the company’s revenue base included the Ellex name, which is a strong brand in the United States, prompting the name change to Nova Eye Medical.

While about 170 staff now work for the Lumibird-owned Ellex in the suburb of Mawson Lakes and its subsidiaries around the world, Nova Eye has set up new headquarters in inner-city Adelaide and has about 50 staff mainly in California and South Australia.

The publicly-listed Nova Eye is now focused on its consumable iTrack and Molteno devices for treating glaucoma. 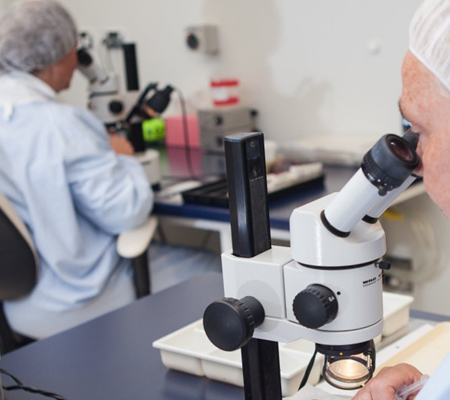 However, last week Nova Eye announced to the Australian Securities Exchange it had established a subsidiary (AlphaRET) to support the commercial development of its 2RT technology for treating age-related macular degeneration (AMD) – the most common cause of blindness in the developed world.

Based on seminal research by a team led by Ellex founder and innovative force Victor Previn about a decade ago, 2RT nanosecond laser therapy has now matured into a world-first intervention designed to slow the degenerative process associated with AMD.

AlphaRET aims to establish a three-year multicentre study in the US to gain FDA clearance for 2RT to treat patients with intermediate stage AMD. The 2RT product already has a CE Mark meaning it can be used for treatment in Europe and about 40 trial units have already been sold.

A previous major study clinical study between 2012 and 2018 showed positive results in the potential for 2RT to reduce the rate of AMD progression but a further study is required before FDA clearance can be granted.

Nova Eye Medical director Tom Spurling said AlphaRET would seek partners in order to fund the study. Importantly, the split-off will enable the AlphaRET company to undertake this partnership without impacting the glaucoma side of the business.

“We are the first company in the world with something like this and we aim to establish a business model for such therapies in the future,” he told InDaily.

“It requires work, it requires investment but what we have already shows it works and we have a leading position.”

The small Dunedin company developed and manufactures glaucoma drainage devices for cases of severe and complex glaucoma. The carefully crafted polypropylene implants are about the size of a thumbnail and will continue to be made in Dunedin but will now be sold by Nova Eye’s sales team worldwide. “Being able to give it to our existing glaucoma sales force who already have iTrack in their bag is showing a nice uplift in sales,” Spurling said.

“We are also getting a much better price for it because we’re selling it direct to doctors rather than going through a distributor.

“In that competitive glaucoma space there are a lot of single product companies so we’re now one of the few companies with more than one product and we would like to expand that further.”

The iTrack device is still Nova Eye’s major breadwinner with about 14,000 units sold last financial year. The US accounted for almost 60 per cent of sales, followed by China, Germany and Switzerland.

Used in minimally invasive glaucoma surgery, the consumable device clears and flushes the irrigation system of the eye that becomes clogged, leading to pressure build-up in the eye and glaucoma.

An application for admission on the Australian Government’s prosthesis list was made in March and is still awaiting the outcome.

Nova Eye manufactures iTrack in California to support its biggest market but sales were severely hampered during the initial coronavirus lockdown from March to June, forcing the company to access the US equivalent of JobKeeper.

“Elective surgeries in the United States were pretty much stopped and that led to overall financial year sales being down a bit on the previous year but prior to COVID-19 we were growing at about 20 per cent,” Spurling said.

“We have been happy with the market so far this fiscal year and we continue to look forward to COVID not impacting our business.”

Spurling, who was Ellex CEO from 2011 to 2019, said while the loss of the Ellex name meant the company had to rebrand it had also led to there now being two ophthalmic device companies in South Australia.

“As an ASX listed company we’re always for sale and we received an offer from a very credible European company Lumibird for an amount of money that we felt was fair,” he said.

“It’s a wonderful business and we’re very proud of having grown it to that stage but we received a good offer for the business and brand,  and by approving the sale, our shareholders agreed.

“Sure, this has meant that we have to introduce the  new brand Nova Eye, but the iTrack brand was already known.”

“While our sales are global, at our heart we remain an Adelaide business and we think there are a lot of opportunities for our company to grow and South Australia has a major to part to play in that growth because there are good skill sets here and it’s safe.”